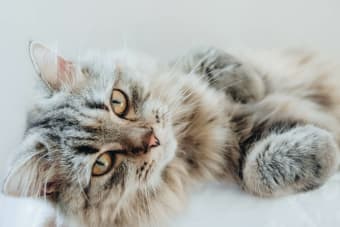 Our Fort Pierce veterinary neurologists diagnose and treat cats that are experiencing seizures for a variety of reasons ranging from diabetes to poisoning. Today, we look at epilepsy in cats including some different types of seizures and common symptoms.

Epilepsy is a condition characterized by recurrent seizures. While somewhat rare, cats like people, can experience seizures and be diagnosed with epilepsy.

Causes Of Seizures In Cats

Seizures in cats tend to be much rarer than seizures in dogs. For the most part, seizures in cats typically stem from disease or injury within the cat's brain or external factors such as toxins rather than being caused by an inherited condition.

Intracranial (Inside The Brain)

Intracranial causes of seizures can occur due to structural diseases within the cat's brain such as a tumor, inflammation of the brain, an infection (encephalitis), brain malformation, head trauma, stroke, or functional issues within the brain (primary epilepsy). Symptoms of intracranial seizures in cats can include circling, restlessness or lethargy.

If your cat is diagnosed with primary epilepsy it means that your cat's seizures are due to functional problems in the brain, rather than structural issues. This means that there is a chemical imbalance within your cat's brain between the excitatory signals and inhibitory signals. Cats with primary epilepsy will often begin to have seizures when they reach young adulthood.

If the cause of your cat's seizures is diagnosed as stemming from an extra-cranial condition then your cat's seizures are being caused by something outside of the brain. The most common causes of extra-cranial seizures in cats are toxins, poisons, or metabolic diseases such as diabetes. Infectious central nervous system diseases including feline infectious peritonitis (FIP), toxoplasmosis, feline leukemia virus (FeLV), cryptococcus, and feline immunodeficiency virus (FIV) can also lead to seizures in cats.

If your cat's brain is healthy, seizures may be caused due to a reaction to poisons and toxins, or due to changes in blood composition stemming from metabolic conditions such as diabetes or liver and kidney disease. If the cause of your cat's seizure is due to exposure to a toxin, there will typically only be a single seizure.

Symptoms Of Epilepsy In Cats

Seizures in cats typically only last a couple of minutes, although sometimes they can experience cluster seizures (multiple seizures) over a few hours or a few days. If your cat is having a seizure, its symptoms will depend upon whether the seizure is generalized or partial.

When it comes to seizures in cats, diagnosis is critical, because there could be many possible causes. Diagnostic testing can include blood tests, urinalysis, spinal fluid testing, x-rays, CT scans, or MRIs.

The goal of testing and diagnosis is to pinpoint the underlying cause of your cat's seizures to determine the best possible treatment.

If your cat is experiencing seizures, it's important to seek treatment as soon as possible, as recurrent seizures can lead to further brain damage, more severe seizures, or other health complications. When treating cats with seizures the primary focus is on the underlying cause of the condition. In cases where there is no treatment available for the underlying cause, or the cause remains unknown, anti-convulsant medication may be prescribed by your vet.

When beginning treatment for epilepsy in cats patience is essential! It can take some time to determine the right medication for controlling your cat's seizures and the best dosage for your cat.

Successful treatment of epilepsy is a reduction in the number of seizures, and their severity rather than a complete absence of seizures. Total seizure prevention is rarely achieved. That said, even with occasional seizures your cat can go on to have a good quality of life.

An Important Note For Treating Epilepsy In Cats!

If your cat is diagnosed with epilepsy, it will require medication for the remainder of its life. That means that you must follow a few key rules:

Note: The advice provided in this post is intended for informational purposes and does not constitute medical advice regarding pets. For an accurate diagnosis of your pet's condition, please make an appointment with your vet.

If your cat is experiencing seizures, contact us for information on seeking care with our specialists. Your primary veterinarian can refer your feline friend to Animal Urgent Care Center for veterinary care from our veterinary neurology team.

Animal Urgent Care Center is accepting new patients! Our experienced vets are passionate about the health of Fort Pierce companion animals. Get in touch today to book your pet's first appointment.